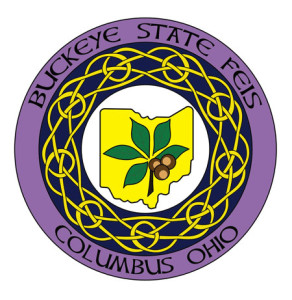 The 6th Annual Buckeye State Feis was held on April 5th, 2014 at the The Franklin County Veterans Memorial in Columbus, Ohio.

Venue – This is the fifth feis I have attended at Vets Memorial. Buckeye has been held here every year since its inauguration,  and we have been to all except one due to a dance school change.

I like the venue. It is big and there is plenty of room for the stages to be spread and still be good size. There were six stages, but I was focused on Stage 1, the OC stage (but some PC comps ended up dancing on it), and Stage 2, the PC stage. Stage 1 was 40 x 32, and stage 2 was 32 x 32, which, if I remember correctly, are the biggest stages I have seen at a ‘normal’ feis.

I did see some a few slips and falls, but the feis volunteers were very proactive trying to stay on top of stage maintenance. Dancing came to a stop on one of the stages so they could mop it after one fall, and they kept a wet towel by the side of the stage so dancers could wet their shoes before dancing.

Seating was plentiful for the most part. There were some feis shaming incidents, but in general we were always able to sit to watch TGC dance.

Results for champs were held over on one side of the hall, away from most stages which was good, but, it was too close to the concessions. During one awards ceremony, they had three large comps, along with the parents and other observers waiting to hear results, and it was so packed that some dancers had a hard time getting to the front if they were called.

Camping, I thought, was pretty good, with lots of areas set aside to store gear. This made the feis shaming incidents more obnoxious because there was really no need to take up seats with gear.

The concessions (except the actual built-in stands) were grouped together on one side of the hall, and vendors were setup together towards the front of the hall. Very convenient, but see the note about Champ results above.

Parking was good and all located right next to the hall but may have involved a bit of a walk depending on when you arrived. There was a drop zone for dancers and gear. Parking was $7.

Judges – The PC/OC  stages, as always, had 3 judges each. They were attentive, kept things moving, and took very few breaks.

Music – Lots of space between the stages, with each stage having their own musician. No musical confusion, and although I could hear other musicians from where I was sitting between dances, I could not hear them when our stage musician played.

Food – They had the normal convention center fare in the halls concession stands, but they also brought in outside vendors, a gyro stand, a Hawaiian shaved ice truck, a specialty coffee truck, and some others. Prices were OK, but I thought drink prices were a bit gougy, and you weren’t ‘supposed’ to bring in coolers.

Vendors – George the shoe guy, with his daughter who follows WTF on FB… Hi George’s daughter!  :)   A tie-dye t-shirt guy, the typical wig and feis jewelry booths, and one other small jewelry table. No real Irish swag, and TGC was disappointed that no one had any Irish candies :(  You can see a list of the vendors on the feis page.

Results – We got there kind of early (as usual) so there was a few hours between when we arrived and when TGC danced. We watched other champ comps, and it seemed that results for them were very slow. After TGC danced however, it was only about an hour before her results were announced, which, while not the best we have seen at this level, was better than I expected after monitoring for the previous few hours.

Feis Flow – Feis flow was pretty good. From the start of TGC’s first dance to the presentation of her comps results was between 2 and 2 and a half hours. The feis peoples were on top of what was going on on the stages, and rearranged stage use on the champ stages to keep things moving. Well done.

Feis Score: 9.375 – PC/OC is always helped by judges and music, but the Results and especially Flow were pretty good.

We missed each other again! Miss Thing’s comp was held right after lunch on stage 1. There was some seat saving there, but I have gotten to the point that if the only occupant of a chair for hours is a coat or a bag, if I need to sit down, I’ll just move the stuff under the seat, sit and then put the stuff back on the chair afterward. I’ve half been tempted on occasion to take things to the lost and found since they’ve been “abandoned”, but haven’t yet been able to work up the meanness that would require. :-P There was plenty of camping, though, and it really shouldn’t have been a problem to find a spot and leave the seats by the stage for the spectators. I do wonder why they bother putting out chairs for the dancers, though. I have yet to be at a PC/OC stage where the dancers actually use them. Maybe one row of chairs to give them something to hang onto as they stretch while they wait, but we could have really used the others in the spectator area.

Results were slow in coming for Miss Thing’s comp – nearly 2 hours after the finish. That’s been one of our slower ones thus far, but it’s hard to complain since she placed, so it was worth the wait in that regard. *g* We waited out the time very near the awards place, as we saw the crush of people for the previous awards and did want to actually see her if she placed. The lucite trophies they gave to those below 3rd place are very attractive, etched with the feis logo. They gave out medals to the individual dance placers and pieces of Beleek to the top 3 overall finishers, so I thought awards were quite nice.
I was told by some friends that the grades stages were running pretty slow, so they may have had some problems there, but I agree that this is fairly nice feis and one we will continue to attend.

One day Lark, one day :) TGC had a great day, two medals and some lucite. The look of confused joy on her face when she did so well was priceless. We were probably in that crush of people you saw ;)

Next one for us isn’t till May, but I am sure we will cross paths and actually bump into each other one of these days.

Thanks for the comments!

Congrats to TGC!! It’s wonderful to see, isn’t it, how they light up inside when they do well. :-) Miss Thing came home with a medal and a much higher placement than she’s achieved so far, so she was thrilled. Plus, Dad, Gran and Grandpa were there to see it, which made even sweeter.

Queen City is next for us, and then nothing until Cleveland. We aren’t doing Akron, since back to back feiseanna are just too much. June is crazy, and we are feising every weekend. Then we are breaking for a month, so that Miss Thing can go to Camp Rince Ceol again this summer, which she adored last year. We’ll pick up again in August, probably with Feis At the Falls. At some point we will take a vacation which *doesn’t* revolve around Irish Dance, but we won’t know what to do with ourselves. XD

Sorry, think I only saw the first sentence of your reply when I replied the first time.

Looks like we may get a chance to meet at Queen City. May is our hell month, feis or workshop every weekend but the last when my son graduates. Then back at it in June.

Vacation not around Irish Dance…. immmmpossible ;)