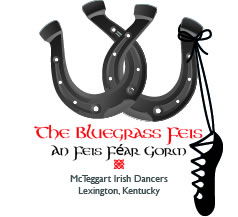 The Bluegrass Feis was held at the Lexington Convention Center on Sunday, May 11th, 2014. This is the second time we have done this feis and you can see my previous review here.

As has become my habit of late, this review focuses on the PC/OC levels. If you have comments on the grades levels, please add them at the bottom of the review or contact me and I can add them for you.

Second time at this venue, and after having read last years review, apparently I am not as big a fan this year.

As it was last year the venue had 7 stages, with 1 – 6 actually being 3 big stages divided down the middle by tape, making two roughly 16 x 24 foot stages that were literally connected. This made for cramped standing for bigger comps and cramped dancing for everyone except the more beginner dancers.

Stages 1 – 6 were for grades, and stage 7 was for PC/OC. Stage 7 was about 24 x 32 but was not divided as the others were. Later in the day, stage 5/6 became just stage 6 and had some PC/OC comps on it. Stage 7 did have some maintenance issues shortly after we got there and dancing came to a halt while they fixed what I was told was a loose screw.

Seating wasn’t bad, but the people who were so courteous the prior day in Cincinnati decided to leave it in Cincinnati. You can see there were a few complaints (here and here) and seating due to these people was not adequate.

Camping was very cramped, a lot worse than I remember last year. I wonder if the number of competitors was increased. Very tight camping area, little room to move and very crowded walkways made the whole thing seem claustrophobic. There were areas on the far end of the venue that could have been used better. I think I made the same observation last year.

Grade level awards were posted at one end of the venue on a large wall, with awards fairly close.

Champ level dancers had their podium stuck in between stages 7 and 5/6. No seating and lots of noise from the stages on both sides.

Free and plentiful, but could involve some walking.

Judges seemed very attentive again today and rated TGC about the same as the previous day (1 judge was the same both days). So maybe it is TGCs skills evening out :) I also thought the judges did an excellent job of keeping things moving.

I really cant speak to the music for the entire venue, and to be honest, since we stayed on stage 7, I am not even sure if the merged stages (1 – 6) had there own musicians (6 different) or each merge shared 1 (3 different). Can somebody help me out with that one?  The musician on 7 seemed fine and I heard no complaints.

Only saw a Italian Ice/gelato stand inside the venue, but a short walk in the same building brought you to a food court with a variety of options, all reasonably priced. There were also options close to the venue.

Feis vendors were pretty much a repeat of who was in Cincinnati at Queen City. Here is the list, but alas, still no Irish M&Ms.  :(

Results for champs, as mentioned above was jammed in between two stages. No seats and music competing with the announcer from both sides. It took about an hour and 15 minutes from the end of TGCs comp to announcements, so slightly worse than QC.

From start to finish, both PC dances and got awards in about 2 hours. That part was good. I also noticed that by 130ish, it seemed like things in the entire venue were starting to wrap up and at least one stage was being torn down.

And the WTF Rating is 8.3… Not the highest for the weekend, but it had its high points. Good job Bluegrass!

Were You There, What Did YOU Think?

Polling software still on sebaticle. Would love to hear what you thought, so can you do it in the comments below? It can be anonymous  :)  Thanks!

Stages moved lightening fast for grades! Good news = done by lunch break. Bad news = unable to help or watch my older dancer on another stage halfway across the hall – past the throngs in the camping. Not enough seating again created overflow standing in aisles. Alas. WHY can’t a convention center venue put out enough chairs??! They have thousands… Pet peeve… Overall a very crowded, chaotic feis in my opinion. Not sure we’ll be back…

[WORDPRESS HASHCASH] The poster sent us ‘0 which is not a hashcash value.

This feis is always one we attend. It’s close to our home (1hour) . This was out first year on PC side. My dd danced at 8am and she was done dancing by 9. Awards were not too far after at 10:30. I am patient with these as I know these take time and they announce with other age groups by the podium. My only 2 issues was. 1. We opted for some fun extras like we had before. The traditional set special and treble reel. My dd age group danced remember at 8am but these 2 specials for her age group were put at the end of the day. 2. The splits for the ages were way off in my opinion. u10 and U16 and O16. They had 2 dancers U10, and 1 over 16 with the rest falling in the age 11-16. Why not do a better age split to add more competition like U12 and u15. Then put U12 at lunch and the other u15 at end of the day when they danced. We were there from 730am until 3:15 at e end of the day just for the 2 specials we had paid for. We don’t want to skip these and like to participate in these extras. This is just my opinion of course but I think a better thought of the age split and times these are danced should be something this feis should look into. Thank U.

Was anyone there for the U12 PC comp? Because during the hard shoe several dancers tripped on some areas of the stage- one which was visibly raised. Between the rounds, they went to sand the stage. Apparently they did not turn it off – and when they plugged it in- it shot across the stage and nearly took out a dancer and his mom. The sander narrowly missed the accordion! It was definitely something I will always remember about the feis!