The Gem City Feis was held on October 12th, 2013 at the Dayton Airport Expo Center in Vandalia, OH.

This is my second year reviewing this feis although we have been here a few times. You can see the last review here.

Venue – As I said last year, the Expo Center is a great venue for a feis. People at the feis even commented that it was their favorite venue. However, last year I also said “probably could have taped off a bigger area for camping then they actually did, since the camping filled up and became difficult to navigate in and out of, but the annoyance was minor” and maybe I was a little too subtle. There is a ton of open area that could have been used for camping, but they taped off the same inadequate area this year and people were openly irritated. TAPE OFF A BIGGER CAMPING AREA IN 2014 PLEASE!

There, got that off my chest. Other than that, it was great!

There were 5 stages again this year and stages 1 & 2 (the OC/PC stages) were huge, 32 x 32 as far as I could tell. The remaining stages were all 24 x 24 and were bigger than the average stage I see at other feiseanna. Each stage had lots of chairs for the audience.

I saw a few slips but did see the staff mopping the stages (at least the one that we were on) at lunch, and the monitors were very good at cleaning up any foreign objects that happened to fall off dancers while they danced.

Parking, as last year, was plentiful but if you didn’t get there early, like at 8am, you were going to have to park out a ways. There is a drop zone available though.

Venue Score: 7.5 (down a little from last year due to camping situation)

Judges – The girl child had three dances and was judged by two different judges. Generally I would say that was not great, but on our stage they rotated a few times during the morning comps and it just so happened that the same judge rotated back to judge her again in the afternoon. One of the Moms told me that on her stage, her dancer had the same judge for 4 dances. I think that is unacceptable and could give unfair advantage (or disadvantage) to the dancers.

Music – All stages had their own music and were spaced well enough so as not to bleed over.

On a side note, the nice lady at the concession stand told me she did not realize there was live music at these events. Oh, and that the music was very repetitive. We may not see her work the stand next year ;)

Food – Same menu as last year, burgers, brats and dogs, pretzels, pizza, salad, sandwiches, drinks and some breakfast items. The food prices were good but the drink prices were (IMHO) very high. $4 or $5 sandwiches and the quality was ok, but a soda was $2.50 for a bottle. They had beer, but I did not see the price on that.

Vendors – Vendors were the standard list which you can see here. George the shoe guy, the wig ladies, the Zuca couple from Georgia, the ribbon lady, one Irish swag guy who sold sweatshirts, posters and a few other things, t-shirt vendor and a photographer.

The only noticeable change (to me) was that the feis t-shirts were not pre-printed like last year, and you could ‘customize’ them a bit, otherwise same-o same-o.

Results – Results were posted on the wall in about 15 minutes and that is excellent in my opinion. No apparent Twitter or Facebook posts, but I did not search very hard for them, so if any of you saw them, please let me know. 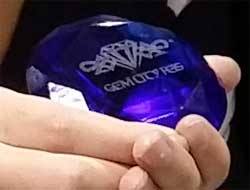 Awards were right next to the results and were divided by comps instead of by stages, not sure if that helped or not, but TGC never had to wait long for her awards.

I also like the gems that some of the dancers get for 1st place, nice touch.

The other thing I liked is that they had comments ready to be picked up within about 30 minutes of the dancers being finished. Not sure that was in every case, but it was in ours.

Feis Flow – Feis flow was just OK. They had 10 age comps on our stage and they all did the same dance before starting the next dance. I know that is how it usually goes, but with comps having sometimes over 20 dancers, it made for a long wait between dances. I think this wears on the dancers. I know it wears on the parents.

This venue is so large I think they could add a stage or two to help spread the comps out a little. I say that with the caveat that I do not know availability of judges, musicians etc… so this may not be an option, but it would be nice.

All that being said, we started around 11 and were done a little after 3ish with an hour lunch in there, so it was not horrible, but we got there early in case things went quick… you know how that goes, long day.

The feis score consists of Judging, Music, Results and Flow and the overall includes everything.

Totally agree with the review. It is one of our favorite venues for a Feis but I was a little disappointed with the way the judges rotated. We had the same judge for 4/5 dances during the day. I would have liked to see a little more variety to give the dancers a different perspective and feedback.
Camping was ridiculously overcrowded. Once you set up shop, you couldn’t get in ir out without stepping over and on several peoples belongings.
:)

Thanks Christy! And it was nice meeting you. I am sure we will cross paths again soon :)

This is the 4th or 5th time we’ve been to this feis (it starts to blur after a few years) and we’ve always enjoyed coming to Gem City EXCEPT for the camping sitch. UGH. We got there at 8 and we were able to find about a 2 square foot area to plunk a chair into and set down the dance bag so that we could get Miss M ready, and yet there was so much empty space where camping was not allowed and so many rude people who spread out over acres of space, yet never came back until lunch. It’s always been this way, too, and I can’t, for the life of me, figure out why. When I have asked the feis organizers, I never get the same answer twice, but they are always vague. Maybe you can get to the bottom of it. :-)

My girl is on the prelim stage now, so I can’t say anything about the grades stages beyond what I heard, but from what I understood, there were a couple of stalls while the judges changed, and the kids had to sit for awhile waiting. On the prelim side of the things, the judges don’t switch, but you get three of them, so I guess it evens out. :-) Prelim 1st place trophies are gems, too, about 50% bigger than the ones Miss M brought home in Prizewinner, so she is hoping to add one of those to the collection next year.

BTW, we bought a Zuca bag from Sk8 Monkey, and they were terrific folks. They even put the bag together for us before we left and told us how to take it apart again for cleaning. We did not get a t-shirt this year, which we usually do, but I noticed the switch. Food is meh. Miss M liked her turkey sandwich OK, but my brat was fairly tasteless and a bit mushy. That’s what I get for going with something different. I usually end up with pizza, which is OK. I do like the condiment bar for dressing the sandwiches, that’s a nice touch. As far as parking goes, we always park on the right hand side of the building. Most people don’t seem to know about that lot, so we always get a space in the row closest to the building.

I hope TGC did well! Is that her first place trophy in the photo? :-)

Camping… you are preaching to the choir sister! ;)

SK8 Monkey – they are really nice folks. I stopped by and chatted with them a bit. Last year I bought a laptop bag and when I got home, realized it was to small. I called them and they stopped at a Bob Evans near my house on their way home so I could return the bag and get credited. Highly recommend them!

TGC did do well, but she is chasing a 1st(you know how that goes) and has literally gotten 2nd the last 7 tries. That 1st is the last of 8 dances she needs though, so soon :) That is not ‘her’ gem but was taken from a picture where her and her friend were showing off the gems they got. TGC got a 1st and two 2nds. Thanks for asking, and how did Miss M do?

Congrats to TGC and here’s hoping she gets that first next feis. :-) Miss M was 6th, which was pretty good for a 1st Prelim comp.

Yeah Miss M! We will have to meet one of these days you know :)

I spoke to someone in charge of a feis and commented to her about not mopping the stage (it was a comment you had left regarding her feis). She stated that it is up to the judges as to when it’s mopped. At times the judges see that as a dancer “control” issue. She stated they had mentioned mopping to the judge and the judge replied no…it’s not the stage. I thought that this may give you a different perspective.

Thanks! I did not know that. I will keep an eye out in the future to see if I see feis-wide cleaning or just spot cleaning. For Gem City, I actually only saw one stage being mopped and assumed I had missed the others.

Hmm. I run at stage at the North Coast Feis, and when to mop the stage is entirely at the discretion of the stage monitor. In truth, it would never have occurred to us to even ask the judges.

Dancer safety and injury prevention is a top priority for us. The stages are freshly sanded before the feis, and the Stage Maintenance guys even have sanding blocks as part of their kits. We keep damp towels for the dancers to step on at the stage loading point, which we refresh often, and if we see dancers slipping in a particular part of the stage we call for the mop between dances. If someone actually falls, we stop the stage and call for the mop. We’ve never had a judge question this.

I can’t imagine why a judge would think that slick spots on a stage are under the dancer’s control, unless they think that they are supposed to be aware of them and avoid them. But that’s taking an awful chance. Last week at the Halloween Feis in Pittsburgh, we saw several falls on one stage in particular, including one in which the dancer was so badly injured that she had to be carried off of the stage. They never did mop, which really made me angry. Putting tape on your dancer’s shoes helps, but it’s the feis’s responsibility to make the stages as safe as they can possibly make them, and the judges should not be able to override that.