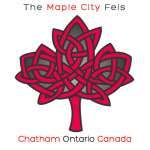 The Inaugural Maple City Feis was held on February 21st, 2015 at the John D. Bradley Convention Center in Chatham, Ontario, Canada, and was hosted by the Cornell School.

Any feis can have its positives and negatives, and this feis is no different. Not going to pull any punches on the lows, considering this was the first one, or restrain myself on the highs. I mean if I can ding the feis that I was part of, why would I be any different for anyone else ;)

I do think the hand made chocolates in the shape of a maple leaf given to each dancer was a nice touch, especially if the dancer has nut allergies and does not eat anything where we can’t read the label, do she gave it to her Dad. It was delish by the way ;)

Our initial reaction to this ‘convention center’ was “wow, that’s small.” Might be the fact we are used to places like the IX Center at North Coast, but considering our initial thoughts, I thought this was a pretty good venue. In general, it was of adequate size for the number of competitors that attended, but I thought they could have used the space a little better.

As soon as you walked in, to the right were a number of long tables down one wall, adequate for eating, but really not much else. These took up a great deal of space, were not necessarily located close enough to any stage to see, and ended up being camping so when it was time to eat, seating for eating was hard to come by.

Temperature wise, I thought it was comfortable considering the meh weather outside. There only seemed to be one restroom per gender, but that did not seem to be an issue considering the attendance, and the venue was small enough where they were fairly convenient.

There were two larger rooms off one end of the venue. One served as the Open Champs stage area, and the other held the Champs award area with a podium, the grades awards table, and a section set aside for used dress sales.

The Awards/Dress room was fine, the Open Champ room was a claustrophobes nightmare. The stage was huge and marley covered, raised well above the spectators, then came the judge area, a bit lower but still raised, and then the spectator seating. As always, it seemed that people took as many chairs as their luggage needed, leaving lots of people standing, blocking walkways, etc… At one point, they were three deep at the entrance to the room, making entry and exit nearly impossible. IMHO, they could have taken out a third of the chairs, which, if nothing else, would have made more standing and travel room.

There were six stages in all. Stage 6, the Open Champ stage, as mentioned above, was huge, with too much seating, which was a stark contrast to the remaining stages which were, considering the size of the venue, to small, and there was NO SEATING SET UP FOR SPECTATORS!

Stages 1 & 2, and 3 & 4 were combined, with a single musician each (at least the stage I saw, but it only makes sense considering the way they were set up that the other was the same). These stages were set so they were back-to-back, and the best I can tell they were individually about 20ish x 16ish feet each. Thing is, if you line a big comp of dancers up on each one, who, because they are back-to-back, are standing on the stage, and dance two or three dancers at a time, things start getting tight really quickly.

Stage 1 & 2 was covered with what looked like gray (or grey depending on your country) marley, and was used later as a single stage for PC set dances, which was an adequate size for that purpose. Stages 3 & 4 were just plywood, and still to small, but I digress.

Stage 5 was the PC stage, was marley covered, and appeared to be about 24 x 32. Good size.

The feis volunteers seemed to be on top of stage maintenance, and I did not see any slips or falls during the day.

Recommendation: I think there was enough room in the venue to separate the stages so none were joined, which would have reduced stage congestion since dancers would be able to line up behind, instead of on, the stage.

Recommendation: Chairs, get chairs, and put them out for the spectators, not just around the tables and in the OC room.

Oh, and did I mention chairs would be a nice addition?

Camping was probably adequate, but an area was not marked off, so it tended to spread out and spill over into the ‘walkways.’ Combine that with people standing to view the dancing, and the people who set up their camp chairs closer to the stages, it made it difficult to get around.

I cannot speak to the grades level judging, other than the fact there was one on each stage. How often or if they rotated I do not know, but I did hear one comment that one dancer had danced for the same judge for all her dances.

There were three judges on each the PC and OC stages, whom seemed attentive.

As mentioned, the ‘combined’ stages shared a musician, and the champ stages (5 and 6) each had their own musician. If you were standing near the center of the venue, there was a lot of musical confusion, but it decreased nearer the stages.

I did hear one musical negative, and that was regarding the keyboard player. He seemed to start each of the pieces in a less traditional way. One sounded to me like the start of a 50’s rock and roll song, and I heard a similar comment from another spectator. I really didn’t put to much thought into that until I heard dancers saying that it was hard to get a good count with the way he started the songs.

Convention center food, pizza, wraps, salads, fried stuffs, drinks etc… which was not super expensive. I shared a wrap with TGC that was pretty good. The pizza looked good and the slices were large, so no complaints. There were two concession stands set up and there really never seemed to be an obnoxious line.

Well, there was one complaint, I did not find out till late in the day I missed an opportunity to have poutine. THAT won’t happen again.

Only a few, and not all dance related. You could probably get any necessities for dance, but compared to other feiseanna I attend, the vendor pickings were a bit sparse.

SIDE NOTE: They did have Cadbury, but no Smarties :(

I am torn here…. lunch break was set to end at 12:30, and close to 1:00 our stage had not resumed while others already had. When you have been STANDING AROUND (yes, that is a no chairs remark) for hours, it starts to wear on both the dancers and the spectators.

That being said however, when they got started, they were through the hard and soft shoe rounds, and the set for a ‘larger’ comp in just about an hour. Makes you wonder where the disconnect on getting lunch done on time if the morning had run the same way.

Results for grades were posted along one wall near all the tables. I liked the fact that they posted just competitor numbers and no names, but the size of the font was a bit hard to read and could have been much larger considering the limited info on each results sheet.

For champ results, I am used to waiting at least 60 minutes, and most often about 90 to get results, so I was VERY IMPRESSED that results were ready in about 30 minutes for TGCs comp. 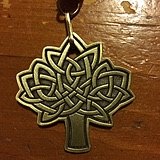 There were medals in the shape of the feis logo which I thought was cool.

Each of the ‘placers’ got a small momentum that looked like a nice glass statue, but on further  investigation, were just plastic and felt a little cheap.

Champs had sashes for top 3, and some other chotchkies. Didn’t get a close enough look at them. The 1st place dancer recieved a bottle of maple syrup in a maple leaf shaped bottle. Very cool touch.

No real social media effort that I saw, but ONE OF THE BEST FEIS WEBSITES I HAVE SEEN. Parallax scrolling, very geeky and appreciated by those of us who notice stuff like that ;)

I really think this feis has potential. A number of the ‘cons’ I think could be easily corrected. I know it was the first one, so I am interested to see where it goes in the future.

What Did You Think?

This was my first feis with one daughter in grades and one in champs – which caused for some stress, though nothing to do with the quality of the feis, just my new lot in life! The feis flow was great – had both kids done dancing by 10:30, which has never happened! In grades, the shared stages were tiny & awkward – worked out okay for my 6 year old, but it must have been bad for the older kids. There was no judge rotation that I saw. My daughter had one judge for her 3 advanced beginner dances and a different judge for her novice dance which was on a different stage. All judges in both grades & champs left much appreciated comments. I think the #1 thing this feis could do to improve would be to attract more grades dancers – there were many competitions that did not have the required 5 dancers to count for moving up – even after combining age groups. That is just not fun for anyone after paying & travelling. (chairs would be the #2 thing!) The PC stage was nice, but the music from the keyboard was hard to hear over the accordion at the next stage. I would have put the keyboard over at the grades stage & the accordion at the PC stage. I did not venture into the champ room, but I heard the edge of the raised stage was difficult to see in the dim light while dancing – a white tape border would go a long way to improve this. Overall a good feis – especially for a first effort. I appreciate people willing to put in the work to create a new feis & I would return next year.

I have a problem with that keyboard player as well – he really shouldn’t be jazzing his music up so much – his job is to play for the dancers – I am reluctant to go to Canadian Feis this year because he seems to be at every Feis and his playing is very difficult to dance to- he should be told to play strictly traditional, that is what he is hired for