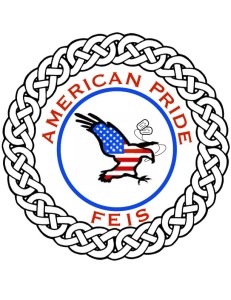 The 1st Annual American Pride Feis was held on November 2, 2013 at the Embassy Suites Nashville – South/Cool Springs in Franklin, Tennessee.

Venue – From a hotel standpoint, it was great. For a feis venue, um, not so much, sorry. Not really a big fan of hotels as feis venues and this one was no exception.

The stages were in the big ballroom that had been divided into smaller rooms with partitions. Stage 1 was partitioned off by itself, Stages 2 & 3 shared a room as did 4 and 5 (someone fact check me on that one please, I really only peeked in and do not remember).

Stages 2 & 3 were used as one of the champ stages late morning so it provided a nice size stage for those comps.

Stage condition seemed good and I did not see any slips or falls. I do not recall any stage maintenance. (I really need to do these reviews right after the feis weekend or take better notes… jeez).

Seating for viewers was not adequate in my opinion, and the rooms were so tight, that standing off to the sides or in the back was very cramped, and only served to hinder traffic flow in the rooms. There was of course the issue with people camping in the viewing chairs, or should I say their stuff was camping, and one woman actually had a bit of a hissy fit when my family sat in ‘their chairs’ to watch the special at lunch time, even though they had not been in the room.

Side Note: Dear rude lady, there was no need to yank your coat off the chair from behind my wife. We are well mannered and gladly would have moved had you let us know we were in ‘your chairs.’

The hallways around the ballroom had the vendors, which inevitably cramped them all the more, and between those and support pillars in some areas, traffic congestion was bad, especially between the dance area and the results room which was around the corner.

Camping was not terrible, especially since the venue was also the feis hotel, but hallway camping is never sufficient, and there was really no area for personal chairs if you happened to bring them.

Parking, to be honest, I cannot comment on. We parked Friday night when we got to the hotel and did not leave the hotel until Saturday evening after the feis. If someone wants to weigh in on parking, feel free.

That however, is the only low feis score, and now for the highlights.

Judges – TGC had three dances and three judges. Can’t get any better.

Musicians – Stage 2 & 3 shared a musician, 1 had its own musician, and I am assuming 4 & 5 shared one. Although I am not typically a fan of sharing musicians, I really did not see any issues with it on stages 2 & 3, and only twice did I witness a stage coming to a halt because of this. The partitions were sufficiently sound dampening so that bleed over was not an issue.

Food – We did not eat any of the concession stand food but did buy canned sodas that were a bit pricey at $2 a piece. Can’t really rate this one sorry.

Vendors – Limited. George was there, and another shoe seller, wigs, tshirts and that was pretty much it. No fun Irish swag, just the feis necessities (feisessities?). There was a nice lady from Refeis That Dress, a solo dress consignment and rental service that I thought was a pretty nifty idea.

Results – The results and awards room was around the corner from the dance area (see note above about traffic flow, ugh), but that inconvenience does not take away from probably the best results turn-around I have seen. Out in hard copy on the wall in about 5 minutes for the ones I witnessed.

Awards were right next to the results wall, so it was very convenient. Plus, they had some unique trophies for 1st place Prizewinners.

Feis Flow – In general, I thought the feis flow was pretty good, but there was one incident that could have been handled a little better.

I noticed that the stages (well 2 & 3 anyway, I heard from a Mom that stage 1 dragged) were moving pretty quickly, and the schedule had a clear lunch break in dances on it. Well, at about 920 stage 3 posted check-in for one of the after lunch dances since they were moving so quickly. This really caused some confusion because 2 & 3 were slated to have champ dances on that combined stage before lunch, and for a while people, present company included, were in a panic because it really was not clear what was going on and dancers were not ready to compete if that checkin post was accurate. It took about 15 minutes to get it sorted out, but when they did, the rest of the day proceeded according to the original schedule and ran smoothly.

Overall Score: 7.83 – A better venue and a bigger variety of vendors and that would be higher, but still WELL DONE American Pride!

Thanks for the shout out for Refeis That Dress – I appreciate it.

No problem… good luck with your endeavor!

I really liked this feis. I thought it was well organized and relaxed. Compared to our last two feis experiences (in Dayton, OH), this was a very nice change of pace. I actually really liked that it was a one-stop feis (being in a hotel…we did not have to get up overly early and I really appreicated that) and felt the seating was way more adequate compared to what I’m used to finding at competitions. I do with there had been more vendors, though. I also was very disappointed that my daughter had been scheduled to dance on 3 different stages and that got cut back to 2, with only 1 of her 4 dances being with a different judge. She definitely got robbed in her hard shoe competition….but, never-the-less, we will definitely return to this feis and I was overall very pleased with it. I loved that the scores were prompt, near the stages, and the volunteers were very helpful and friendly. I think American Pride is off to a great start!

Agree! The hotel was nice and the seating comfortable. I am still not a fan of how packed everything was, but overall they did a great job.

As for judging, that is something you will get used to. You won’t always like it, but you get used to it :) Sometimes it works in our favor, sometimes not, but I think it balances out in the long run.

thanks for overlooking my many typos. ;-) it’s way too early….