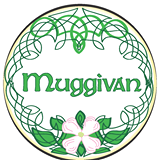 The Inaugural Muggivan Feis took place on October 23, 2016, hosted by the Muggivan School of Irish Dance-Virginia on the grounds of the Central Virginia Celtic Festival and Highland Games in Richmond, VA. The Muggivan Feis is a casual dress feis, with all dancers wearing the event t-shirt and dark bottoms. The t-shirt design was beautifully done on front and back of a white short sleeve t-shirt. There was a feis rate available at the host hotel for those needing hotel rooms.

The Central Virginia Celtic Festival and Highland Games take place on the grounds of the Richmond Raceway, in a grassy area outside of the racetrack. There was ample parking available and plenty of space within the festival grounds to accommodate all attendees. There was also a Highland dance competition happening on the same day, so plenty of dancers and dance families around if anything was needed! Only 1 dance vendor was present at this event, but there were plenty of Scottish and Irish vendors throughout the festival for an eclectic shopping experience. This festival also had a large selection of food vendors for breakfast, lunch, and dinner fare. This event did serve alcohol (arm band required).

As an outdoor event, the stage was located under a tent. Three stages were indicated on the syllabus, but on feis day this manifested as one large (approximately 36 x 12) rectangle that was divided by white tape into 3 (approximately 12 x 12) sections. The stage was elevated at the nearest end approximately 1 foot from the ground and approximately 3 feet from the ground on the far end in order to keep the stage surface level. The stage was covered with Marley/shower pan type sheeting. The festival grounds were quite dusty and the tent had no sides so breaks were taken to sweep the dust from the stage. These individual sections of the larger stage were cramped to say the least with ALL ages of grades dancers dancing 3 at a time. Ceili dances were danced 1 group at a time.

There was a judge assigned to each stage and dancers/judges rotated so that each dancer had 2-3 judges. Judges were attentive, helpful, and left comments.

Carolyn Bartley was the single musician for this feis and she played from 0930-1930 with very few breaks. Ms.Bartley did an excellent job and even festival goers gave compliments to her playing.

As with any first feis, there are going to be some bugs and I think the overall flow of the feis is where any bugs were seen most prominently. The feis began at 0930 with Champs only, utilizing all 3 judges and the full size of the stage. The schedule got ahead before lunch and shortened the lunch break but ceilis remained on time with a 4pm start. It was announced that 2 of the 3 judges had flights to catch and had to leave the venue at 6pm, so grades were run at a break-neck speed and it was also announced that no dance would be held for missing dancers. The communication between stage and check in volunteers began to suffer due to this ultra-fast pace. Trad sets and other special dances completed at 1915 with car headlights illuminating the stage for the remaining judge.

Results were posted in a very small, hard to access area being staffed by 1 volunteer. Results went up in no particular order and got slower and slower as the day progressed. By the end of the day this poor volunteer was swamped with parents, dancers, and TCs looking for results. Beginner through Novice dancers were awarded customized medals with two colored neck ribbons. Whoever worked on the design and execution of the medals did an excellent job! Prizewinner and champs received large trophies, also well designed and very attractive!

The schedule was released a week in advance and the host hotel would not allow grades parents to cancel reservations that were no longer needed due to such a late grades start. The feis has no control over the hotel of course, but I think this contributed to the overall level of unhappiness (long day, school night, etc) witnessed at the event. I hope that the feis committee keeps all of the great things that they accomplished at this feis and just improve on the 1 or 2 issues and it will definitely be a successful Virginia feis!

We were there for champs only and were very happy with our portion of the feis. Champs danced 2 at a time on a huge stage and were ahead of schedule. The musician was awesome and quite the trooper! We also received more feedback than usual from the judges with our results, so it was worth the trip for my daughter. I thought the stages were painted black rather than covered with Marley, but they were relatively good, nevertheless. Dividing the stage into thirds for grades would have made it extremely crowded. I did think the scheduling for grades would cause a major problem later in the day and apparently, it did. Overall, we will probably be back.

My OC dancer danced 3 at a time for soft- and hard-shoe. Because the stage was wide, but not deep, this created more traffic than usual and (potentially) inhibited the dancers’ use of floor space. It wasn’t terrible, but not ideal.

An outdoor feis in late October is risky, weather-wise. It was chilly in the morning (56 degrees at 10 am), and the wind made it feel that much colder. The sun warmed things by mid-day, but the wind didn’t let up. My dancer said that once she was side stage (shaded) it was cold and tough to keep muscles warm while waiting. Maybe sidewalls on the tent next time would help block the wind for the dancers on stage.

I look forward to seeing how this feis grows and improves. It has much potential!

Fun feis (we enjoyed the Celtic Festival & Highland Games) but it was expensive. The stage was divided into thirds for grades which made it cramped to say the least. There was also a layer of dust/dirt on the stage. I saw at least one dancer fall (perhaps dust/dirt related?) There was no spectator seating at this stage (the Highland dance stage had ample seating however).
We would consider attending again next year, hopefully the stage will be larger and maybe they can split the champs and grades like ROI does? Champs on Saturday and grades on Sunday? Although that makes for a long weekend with a family of multiple dancers.