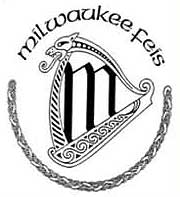 The 24th annual Milwaukee Feis was held on August 10th, 2013 at the Student Union at the University of Wisconsin-Milwaukee, in Milwaukee, Wisconsin.

Editors Note: This feis is run as a back-to-back with the McMenamin Academy Feis and this review will cover a few sections for both feiseanna.

There were 7 stages at the feis, divided into two levels of the Student Union. The stages were each in its own space with plenty of seating, but, in this reporters opinion, limited camping.

Stages 1 – 4 were on the top level and included both the OC (Stage 1) and PC (Stage 2) stages. If my estimates are correct, each of those stages were near, or maybe a bit over 30′ x 30′. Plenty of room for the dancers.

Stages 3 – 7 were smaller, but I did not see any smaller than 24′ x 24′. They all had great seating too, but Stage 4 (the one on the top floor off by itself) was a little awkward because it had lots of bigger comfy chairs that did not allow for viewing as close in. That stage also really only had traffic on one side that seemed congested, but not terrible.

I did have some issues with stage condition. Stage 7 literally had bowed floorboards on one end that contributed to a number of slips and trips. I also saw several slips on Stage 5 and one resulted in a bad fall.

Camping was probably adequate, but I really did not look closely on the top level. Camp areas were well defined and the only place I noticed ‘obvious camping in the viewing seats’ was at Stage 4 where the comfy chairs were… go figure.

Registration, Results and Awards were on the lower level and all close to one another. From the lower level it was a quick trip up the adjacent stairs to the two stage floors. Elevators were also available (but were slow).

Vendors were in the hallway on the way in to where Stages 5 – 7 were, and on the ground floor near registration. Vendor areas did not seem to congest flow to stages as is the issue in many feiseanna.

The only issue I could see somebody having with the venue is if they had dancers on both floors, otherwise I really enjoyed it.

Venue Score: 9  (This also applies to the McMenamin Feis for Sunday)

Judges – The girl child danced 3 times and was judged by 2 different judges. I generally think that can be done better, but the dances were very close together, literally one – three comps apart, so there was really not adequate time for a judge change. I do like feiseanna that go quick, so I can’t really ding them for this.

Music – Every stage had their own musician and all stages were isolated enough where music bleed was no problem. I heard no complaints about the music, and saw none myself.

Musician Score: 10 (This also applies to the McMenamin Feis for Sunday)

Food – A college student union, how do you think the food was? All kinds of variety, subs, wraps, pizza, stir fry, donuts and breakfast items, ice cream, coffee, and probably some I do not remember, plus a little college store to buy other snacks and drinks as well as free standing drink sales booths. The only issue I had with the food was that the options were very limited for breakfast, and having a gluten-free issue in the family, it made it hard to find something. This was not an issue at lunch and there were several gluten free options. Everything was pretty good, and all fairly reasonably priced.

Food Score: 9.5 (This also applies to the McMenamin Feis for Sunday)

Vendors –  2 shoe vendors (George from Balinvilla was there), a nice jewelry and accessory table, 2 tshirt guys, and some shirts and sweatshirts. Noticeably absent was hair and wig vendors which I do not believe I have seen happen before. You can see the complete vendor list here.

I have been to enough of these so that I recognize the vendors and they recognize me, but I met a ‘ray of sunshine’ on Saturday. Victor from Amerigo and Amerigo describes himself as a ‘passionate Spainiard’, I describe him as a humming bird on speed, but in a good way. If you ever have the chance to say hi to Victor, you really should, you will walk away with a smile and a new friend.

Other than me being a Victor fan, I was kind of disappointed in the vendor offerings.

Vendor Score: 6 (This also applies to the McMenamin Feis for Sunday)

Results – This is another feis where FeisWorx was kickin’ out the results, in some cases in about 10 minutes, and I did not have the need to go and look at the board. There was one larger comp where it took 20 -25 minutes to hit FeisWorx, but generally it was less than 15 minutes.

For the Milwaukee Feis, you would go to the “wall” and then turn around and walk a few feet to pick up your awards. Milwaukee was wired and the award volunteers could look up all the results for the dancer. I like that.

I was really impressed with the whole Results flow but I was tied into FeisWorx the whole time, so I am scoring based on my experience. Your mileage may vary.

Feis Flow – Excellent. We started at 11ish and had the last dance and were through by 1. This included a 30 minute lunch and they stuck to their word. They grouped the dances close together which really helped speed us through, but it seems like we always have at least 1 dance after lunch. This quick turn-around between dances does limit the judge rotation, but I really can’t have it both ways.

Keeping the 2 part scoring in mind, the feis score consisting of Judges, Music, Results and Flow and then the overall WTF rating for all items including the venue, food and vendors.

And the WTF Rating – a 8.71, very respectable overall

[…] The girl child danced 3 times and was judged by 1 judge. Like the Milwaukee Feis last week, the dances were grouped very close together so rotation is limited… HOWEVER, in […]