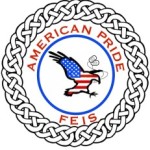 The 3rd Annual American Pride Feis was held Saturday, September 12th, 2015, at the Franklin Field House in Franklin, Tennessee. This review covers some of the general info, but is slated more for the PC/OC levels since that is where we spent most of our time.

Afraid I didn’t make it to this feis last year when it was held at the Gaylord Opryland Resort Convention Center, but the grumbling in the crowd indicated to me that the Franklin Field House was not quite on the same par as the Gaylord.

There were 5 stages, 1 – 4 for the Grades (as far as I can tell, although it makes sense to me that some of the PCs/OCs ‘might’ also could have been on those stages). We were on 5 during our dances. The large venue was split into sections by sliding partitions so there was some separation between the stages, so to speak, and 2 of the stages were in an area, 2 in an adjoining area, and the PC/OC stage in a third area.

Stages 1 – 4 were plywood, and a reasonable size, looked to be about 20′ x 24′, BUT, they were attached along one side so really stages 1 & 2, and 3 & 4 were both just big stages cut in half with tape. Due to their proximity, the combined stages shared a single musician, so there were only 3 in the entire venue, more on that later. Please note, the 20 x 24 was the size of the stage after being cut in half by the tape.

Stage 5 was a pretty good size, about 32′ x 24′ and was textured. Not sure if it was paint (looked to be), but I heard no complaints about the stage from my, or any other dancers. In fact, this is the first feis I remember in a while where I saw no slips or falls. Not saying they did not happen, just that I did not see any. (now that that has come out of my mouth, it seems highly unlikely none happened).

SIDE NOTE: All stages, as in years past, were named after a branch of the armed forces. Why the PC/OC stage was not named after Navy is beyond me, and I will try not to let it affect my review.  ;)

The practice stage, wait, the 6 individual pieces of plywood that served as the practice area, probably could have been handled better. At least they provided a hard surface for the dancers to practice, considering the remainder of the flooring was either like basketball flooring where no hard shoes were allowed, or artificial turf, not the best dance surface.

Results and awards, and the PC/OC podium was in yet another area, separated from the stage areas by a netting, you know, the kind that keeps soccer balls from being kicked into the spectator seats in an indoor arena, which this kind of was. Results were posted on the wall which was right next to where awards could be picked up, very convenient.

The size and layout of the venue allowed for adequate camping, and the Southern Region seems more tolerant of camping in spectator seats, although we never had an issue finding a place to sit.

The concessions and vendors were setup in another open area near the concession stand and front door.

The venue was really large, but easily navigated

Parking was plentiful but may have involved a bit of a walk depending on when you arrived. There was a way to pull right up to the front to drop off dancers and gear though. No charge for the parking, always nice.

The only issue I had with the venue was the climate. They really did not get a handle on that till closer to 10am, and it was VERY warm up until that point. Hopefully noted for next year.

PC/OC  always has 3 judges monitoring the performance. The judges seemed attentive on our stage and took no breaks that I saw, and the same three were there for at least the first half of the day.

There were only seven judges invited, so with 3 at stage 5, and one each on 1 – 4, I am not sure how much rotation was done by judges on the grades level. You should know by now I am a big fan of grades level judge frequent rotation.

Stage 5 had its own musician, Stages 1 & 2, and Stages 3 & 4 each shared a musician. Not a fan of that. It inevitably causes delays somewhere, and I did see some times when not all stages were active due to unbalanced stage assignments.

Tshirt people were there, and the standard accessories tables, but the vendors seemed VERY limited to me. No larger shoe vendors (that I recognized), no ‘fun’ Irish swag, and no Irish M&Ms…. :(

PC/OC were fairly smooth however. The stage monitor announced when awards would be, and there was also a board over in the awards area that listed the time. For us, it showed up about 20 minutes before it happened, which was great. Sometimes a feis will post the notice only a few minutes before, and it is not enough time to find everyone, get the dress on, and get to the awards.

I have commented on other feiseanna that I would like to see them announce the top three in each round, instead of just 1st. At this feis, they did that one better, they announced the top half in each shoe and in the set.

Anyway, between the end of the dancing and the announcement was about 75 minutes, which is probably a bit better than average, so no complaints. We were pretty much done before lunch with everything, so really I had no complaints.

The comp was medium sized, between 15 and 20, and they were done dancing all 3 rounds in just over an hour. The stage monitor kept things moving after the champ stage finally got moving. Casual observation showed they had a hard time getting the stage started and that stage did not start till after 9 a.m.

Other than the building climate issue, and the late start, and the individual practice areas, none of which really seem to impact us very much, well there was some sweating, but I digress, I thought the feis was pretty good. I would give it a 8.25ish, not to shabby.

Take the poll below and if you have comments on what you thought about the feis, please add them below.

This is our 2nd year attending the American Pride Feis and we really like it. I agree that it was super hot in the arena and personally, I don’t feel like it ever really cooled down. We were on stage 3 and 4 for the day. My only complaint (confusion?) was with judge rotation. My daughter rotated between the 2 stages for each dance but it seemed like every time she switched stages, the judge got up and switched too. We ended up with the same judge for all her soft shoe dances and then the same judge for her hard shoe dances. They did switch the judges from stage 1 and 2 with stage 3 and 4 after all the soft shoes were completed but still rotated them stage to stage when the girls switched. It just didn’t make sense to me.

Grades actually moved along well. Everything except for the non-trad specials was done before lunch. I was worried when I saw the stage schedule that we’d be there all day, but everything moved along smoothly.

Grades awards were very generous. Medals all the way to at least 5th place in most comps. The PW trophies were gorgeous.
I loved the new venue! It was open and airy, and the whole feis seemed to be laidback and friendly. My grades level dancers had 4 judges for 6 dances. Excellent rotation!!

That’s great! We ended up with 2 judges for 6 dances! I agree, I really liked the change in venue too.

We attended last year and this. While Gaylord Opryland was beautiful, it was hot there too! Had a chance to chat with the Feis Chair. Nashville is hard to get space in….HUGE convention business. Venue was fine, my dancer had four judges and awards were generous. We will be back!!