And now, there is a sequel visit… read about it here.

Up until now, I have not found any feis accommodations worth blogging about, I mean hotels are hotels right? Some are nicer than others, but generally, as long as they are clean, they are really all the same. But when we waited to long to make a hotel reservation, in Muskegon, the weekend of the Irish Music Festival and feis, I just knew we were going to end up in a hotel that was on the less acceptable end of  ‘really all the same.’  I have to say though, we stayed somewhere this weekend that we all liked so much, I needed to blog about it. 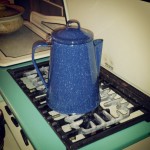 The blue coffee pot, no wires, no plugs, good coffee.

Amanda’s Bequest Bed and Breakfast is a hidden treasure. Located in Montague, about 30 minutes north of Muskegon, it is not your typical feis hotel, and that is probably why we loved it so much. We were greeted late Friday night by Valerie, the proprietor, and chief cook and bottle washer, and upon first meeting, she seemed like any typical B&B owner. She did the typical registration thing, and then gave us a quick tour of the home (which had been built in the late 1800’s), with its eclectic furnishings and large kitchen, which reminded me very much of my grandmothers kitchen in Ireland when I visited her as a child.

Valerie had asked about dietary restrictions when we made the reservations, and we told her of TGC’s nut allergies, and that TMC (the male child) had gluten sensitivities, and when she showed us our room for the weekend, she pointed out the nut-free fruit strudel and gluten free brownies she had prepared, and had waiting in our room as a welcoming snack.  If you know anyone who is gluten free, you know how hard it is to find something that tastes good,  but after we got settled, TMC tried the brownie, and as he tried the first bite, he asked, speaking of Valerie,  ‘do you think she would think it weird if I gave her a hug’? 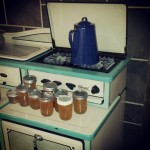 Before settling in, we told Valerie that we would have to be up and out early, and that she did not need to worry about breakfast. She told us that we were the only guests for Friday night, and she would gladly prepare an early breakfast for us. We were grateful, because you all know how hard it is to get a decent breakfast on a feis morning.

Saturday morning I got cleaned up and went to the kitchen to find Valerie, in a dress and apron, making breakfast.  When I asked about the dress and apron, since she had met us in more casual attire the night before, she told me that it was the proper way to serve guests, and considering the style of the home, I literally felt like I had walked back in time. Maybe it was the homemade jars of jams and vegetables spread throughout the kitchen, or the old stove and blue coffee pot heated on the flame of the stove, or the woman in the dress and apron cooking breakfast, but it was all oddly comforting. 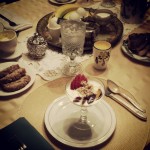 The table was set with an array of mis-matched china that added to the charm. Yogurt with honey and fresh fruit, and a little granola for the wife and I, but not the kids considering their allergies, hard boiled eggs, home-made banana bread and toast (both regular and home made gluten-free), peach jam (home made of course), bananas, orange juice, water, coffee and butter. What a spread, so much nicer than hotel fare, but that was just the half of it. After the yogurt, Valerie brought in plates of biscuits and gravy, with homemade biscuits, including gluten free for TMC, and she had even improvised the gravy recipe to be gluten free. It included scrambled eggs and salsa that had started in the garden the day before. It was all excellent, and, this is embarrassing for someone whose Mum taught him to always clean his plate, but I couldn’t, there was simply to much wonderful food. Oh, and did I tell you the eggs came from the chickens in the back yard? True story. We also met John, the other half of the team, who keeps the physical condition of the home up to par, but Saturday, he kept an eye on us during breakfast and made sure our coffee was topped off and that we were not in need of anything. 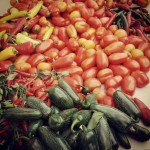 Vegetables from the garden that eventually became fresh salsa.

We went to the feis, spent a few hours at the music festival, and came back to find Valerie and John. We chatted a bit, and got recommendations for dinner.  I noticed fresh jars of plum jam Valerie had made because I had commented I hadn’t tried the peach since I had had an allergic reaction to peaches as a child. She told me she just happened to have plums that she needed to use anyway. Wow.

We returned after dinner to an empty house, so we all went outside to see the chicken, ducks and rabbits in the backyard. We must have spent 45 minutes out there and both the kids loved watching and taking pictures of the animals.

After our time outside we went in and sat in the parlor where TGC checked out the View-Master, a toy from my childhood, while TMC played the piano. Both kids were a little disappointed the jigsaw puzzle had already been completed, and my wife sat on the floor playing with an antique pinball machine. I just sat, and took it all in.

Other guests arrived and we all went outside to see about starting a fire in the fire pit. Thankfully Valerie and John soon returned, and shortly we were all gathered around a nice fire. John brought out beer and wine and we told stories, shared parenting tips, tried to get recipes out of Valerie and just relaxed. The kids hung out with us too, joining in the conversation occasionally. Thinking back, I hardly saw a cell phone come out of a pocket while we were out there.

Breakfast the next morning was basically a repeat of day 1. It started with strawberries and watermelon from the garden, and a warm slice of Depression Era Apple Pie topped with a slice of locally made cheddar cheese. TMC got his own gluten free mini version of the pie. Valerie had talked about how popular this pie was and even has classes just for making it, and she had shared a few of the ingredients around the fire the night before. It was wonderful, and I could taste the flavor layers she had talked about. That would have been enough for breakfast by itself, but that was not to be. Large plates of ‘breakfast bake’ (think of quiche on steroids, gluten free option was also available), fried potatoes, bacon, fresh salsa, and all the extras I listed on day one. Once again, my Mum would not be pleased as I sent back the plate with food still remaining. John kept us topped off with coffee and whatever else we needed, and both him and Valerie checked in on us while we ate. 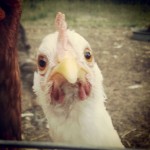 This is either Larry, Moe or Curly, captured digitally by TMC.

After breakfast, the kids enjoyed watching the rabbits, chickens and ducks get the ‘scraps’ and we all laughed as the birds had a dessert of meal worms. And have you ever seen a rabbit hop off with a slice of toast in its mouth? Funny stuff, but not quite as funny as watching two chickens chase a moth. The kids took more pics, learned a little about the different types of birds from Valerie as she fed them, and TGC got a chance to pet the rabbits as they were being fed. TMC also got some pics of the deer that seemed to be ever present on the perimeter of the grounds, literally just yards away.

Shortly thereafter, we packed the car and TMC got that hug from Valerie he had wondered about on Friday night. We told them that we were making verbal reservations for next year for the feis and festival weekend, and after we bought some jam, we were on our way.

So why the long story? From the time we got there on Friday night, till the time we got home on Sunday night, the kids had about 20 minutes of TV. Sure, they had their phones, but a lot of the time when they had them out, they were taking pictures of animals, or people, or other cool things, and they weren’t constantly texting their friends or Facebooking. We all learned some history, facts about nature, how to enjoy the simple things like when us ‘grown ups’ were kids, and gained a new appreciation for basic, wholesome cooking, and we laughed and just enjoyed being a family. I think we will start waiting to long to make reservations more often, never know where it might lead.

My daughter and I have stayed in some great B&B’s through AirB&B while feising. I think that was part of the fun of traveling and meeting new people made our stays even more interesting!

What a wonderful blog post. Such kind words. Thank you. John and I sure enjoyed your visit and look forward to seeing you again!

Thanks for sharing your great experience. Not a lot of B&Bs are appropriate for kids, but there’s nothing like quality time, making lasting memories with the family and being taken care of so well. Valerie and John are terrific hosts.