We got to Niagara Falls on Friday night and stayed through Monday morning, so I figured I would add this bonus ‘tourism review.’ 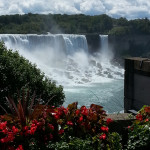 What can I say, if you go to this feis, you are literally a short walk away from an impressive natural attraction. We saw the falls every day during our walks and drove down one night to see the falls lit up. If you have never been, its one of those ‘you gotta see it’ places. 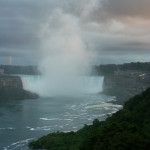 We stayed on the Canadian side, which actually has more attractions than the American side. You can visit places like Hard Rock (actually on both sides), Planet Hollywood, Margaritaville (which has Alexander Keith’s on tap, a fabulous beer I first had in Halifax where it is brewed), Ripleys Believe It Or Not, and lots of wax museums. If you have ever been to Myrtle Beach, or Gatlinburg, it’s kinda like that, with a Canadian accent. I would consider it a ‘family tourist area’ but tattoo parlors and head shops were evident on the main street. We stayed up on Lundy’s Lane, a few miles from the main area and there were some more mature shops in plain view, if you know what I mean. 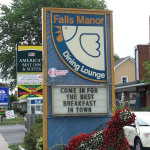 Probably one of the most ethnically diverse areas we have visited, there were lots of food choices, 75% of which appeared to be pizza places. We didn’t have a bad meal, and there was lots of good beer. We had a great breakfast up on Lundy’s Lane at Falls Manor Dining Lounge, who claimed to have the best breakfast in town. Considering the crowd and number of locals, and the food, I would have to agree. We also found a great local bar called Chip N Charlies up on Lundy’s Lane that had great wings, pizza, fish and chips and burgers, and was CONSIDERABLY less expensive than all the other meals we had while in the area (including breakfast at Falls Manor and we had beer with our meal at CnC). Worth the drive up the lane.

Our hotel was less expensive but older and would not suit all tastes. There were lots of other options though.

Parking was everywhere, but was between $5 and $15 a day. The good thing is that once parked, you can walk everywhere.

All in all, if you go to the feis and have not been to this area before, I would recommend staying another day or two to have a little fun in there. If you can, get a hotel with a kitchenette to save on eating-out costs because the whole area is pricey, but as the kids say, YOLO.