King O Sullivan Winterfeis was held January 26-27, 2018 at the Marriot Evergreen Resort within Stone Mountain Park, Georgia. Instrumental music and vocal competitions were held Friday evening. Grades, championships, figures, specials, art, and baking competitions were held Saturday. New this year were the additional Second Chance competitions for Novice, Prizewinner, and Championship dancers. This feis is the traditional start of the new feis season for Atlanta area dancers. Sadly, due largely to the severe flu going around, attendance was lower than usual. read more

Feis ATL was held November 18, 2017, at the Renaissance Waverly Marriott, in Atlanta, GA. This feis is hosted by the Drake School of Irish Dance. Usually, this means fun, fabulous, crowded, and chaotic. Thankfully, this new venue handled the crowds and chaos beautifully. See also Venue.

The Renaissance Waverly Marriott was a new experience for the Wilkes family. Hotel feisanna are not my favorite. This hotel convention center was a surprise. The ballrooms were large enough to handle the crowds. Music carry over was not an issue. Bathrooms were kept cleaned and stocked. Ash had a couple of options for his feis coffee, which made the feis more pleasant for the entire family. For younger siblings, there were a few entertaining options. Besides the escalators in the lobby, Feis ATL used a rented ballroom to show How to Train Your Dragon. Those staying in the hotel also had the option of a heated indoor pool. read more

Celtic Rose Feis 2017 was held October 21, 2017, at the Atlanta Marriott Century Center, near Emory University. The Celtic trilogy feiseanna are all hosted by the Rowena Ryan Irish Dance Academy. This feis offered several specials and cultural competitions, in addition to the regular ones. These included Gaelic spoken word, parent/child, Celtic art, soda bread, soft shoe, and hard shoe specials. This was the first feis, in a two feis weekend.

Hotel feis. Not my personal favorite. Crowded, chaotic. A Fire Marshall nightmare. It was also quite a challenge to reach. That being said, the Wilkes family did stay in the hotel. It was well appointed, clean, and the staff we encountered were friendly. Except when they were dealing with ballroom access bathroom problems. Or when the Georgia Tech football team event and the feis couldn’t seem to work out hallway traffic difficulties. They did get chairs out of the back closets for grandparents waiting in the confusion, which was kind of them. It also appeared to be strongly encouraged by the Georgia Tech football team staff. Velvet ropes were put into use in a couple of areas. But, otherwise, the staff was friendly. Several feis attendees were seen posing for photos with the football players. read more

The, possibly, 20th anniversary Feis Na Tara was held February 27-28, 2015. The feis was held at the Marriott Atlanta Airport. This feis holds competitions on Friday night and all day Saturday. The Devil Went Down to Georgia treble reel is a popular event for all ages. These are held on Friday night. This year, the proceeds went to the Wounded Warrior fund. This feis also offers competitions in Celtic Art, Music, Vocals, Gaelic, and Baking. These are in addition to the grades, championships, and figure competitions. read more

The 20th Annual Feis Na Tara was held on Friday & Saturday, February 27th & 28th 2015 by the Mulligan School of Irish Step Dance and the Tara Dance Company, at the Marriot Atlanta Airport, in Atlanta, Georgia. This was our first trip to this feis.

I am attempting to make this a Champs review, in the hopes another reviewer who also attended will be providing a Grades Review (no pressure), but I have included some Grades notes below, just in case :)

Feis ATL was held November 14th and 15th of 2014, at the Sheraton Hotel in downtown Atlanta, Georgia. This was a Drake feis, which means fun, fabulous, chaotic, and crowded. The feis offered competitions in musical instruments, vocals, Celtic art work, baking, traditional and non traditional sets, treble reels, and a Dancer of the Day award, in addition to the regular feis competition schedule.

In the tradition of fun and fabulous, this feis offered some unexpected surprises. Friday night, there was a casual Irish music session in the registration hall. On Saturday, the FROZEN princesses made appearances and lead a pre awards show sing-a-long. On Saturday night, they held a post feis luau at the hotel pool for feis attendees. read more 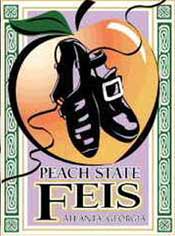 The Peach State Feis was held May 2-3, 2014, in Atlanta, Georgia.  The feis was held at the Westin Atlanta Perimeter North.  This is the same location as last year.  The feis is run by Peach State Feis Inc.  Truly, this is a feis of the Drake School.  Their Southern Region feisanna, typically, are run under the supervision of the talented and famous Karl Drake.  New this year, is the inclusion of a Feis Fiesta, held after the Friday evening competitions.  This feis has no competitor cap.  It also includes many competitions for all ages and abilities.  From the Gaelic language, Celtic Art, and music competitions to their treble reels and traditional set competitions, this is a feis that promises to hold something for everyone. read more