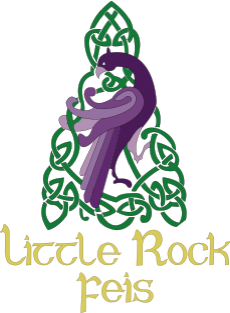 Being a fan of convention center feisanna, this location began my appreciation for such events. There was plenty of seating at the large stage, smaller stage, and awards stage. Camping was constantly monitored, politely, for neatness and traffic flow. The large, carpeted registration area and foyer, outside the feis hall, provided ample practice space for both hard and soft shoes. There were plenty of restrooms, which were kept neat and stocked the entire day. The stages were set up in the same pattern as last year. One change, which some appreciated, was to have the champion levels compete first, on the main stage. Concurrently, on the smaller performance stage, Prizewinner (Open) and Adult competitions were held. The stages were raised, with stair railings, back railings, and covered with a dance floor traction material. The material did become rippled, on all the performance stages. This made a few areas of the stages more difficult for dancing than others. The awards stage being in the same hall was a mixed blessing. The McCafferty School puts forward an excellent awards stage. A large podium takes center stage. It is flanked by tall, professional banners for the feis and school. The stage is large enough to accommodate all the placing dancers for champion awards presentations. Certain competitions were interrupted by the announcements. Or the awards were interrupted by the competitions. A few dancers missed their award presentations entirely, due to those difficulties. Towards the end of the day, they agreed to a compromise of low level microphone awards presentations and a louder volume for the stage speakers.

Parking was a block, or more away from the venue. The closest parking deck was $5 for the day. The fortunate few secured close metered spaces, which are free on the weekends. The rest either parked at their hotel and walked, or parked further away…and walked.

There were 5 vendors at the feis, not including the volunteer selling school feis shirts. The most fascinating of these vendors displayed hand crafted musical instruments. One of my little darlings requested a Welsh pattern instrument, crafted in the 11th century style. Since the little darling has not yet mastered, or shown much interest, in the tin whistle we purchased sometime back, the request was declined. Our family does enjoy shopping for interesting Irish dance, Celtic, and Feis themed items. This was not the feis for such shopping.

Other vendors included one of each of the following:

Convention center vending was available in the feis hall. Outside food and drinks were also permitted. We chose to bring in our own food and drink. So, my opinion of the feis food options is not included in this review.

For me, the best musician to see at a feis is an accordionist. Truly, I did not appreciate an accordionist until we began to feis. The only time we saw an accordion was for a few of the figures and the family figure competition. The rest of the time, both performance stages were accompanied by extremely talented violinists. Even well mic’d, they were a challenge to hear on the stage, at the best of times. An echoing convention hall can distort the light notes of the violin. When the volume was raised on the performance stage speakers, it certainly improved for both dancers and spectators. At the beginning of the feis, if you were not within 2 rows of the stage, you could not hear the music being played at all. It made watching the hard shoe competitions a different experience. Especially since all the spectators could hear were the beats from the dancers.

Our little darlings danced solo steps for 2 different judges. One of the judges was for 2 of their soft shoe dances. They also danced for a different judge for their figure competition. Considering the size of the competition and the feis hall, I do believe the judges were rotated adequately. Some of the other competitors did not have the same judge rotation. The larger stage appeared to have an easier time of rotating judges between it’s 3 stages. The smaller stage, to one side of the hall, was a bit slower in the judge rotation. My little darlings danced all of their solo steps on the smaller stage. Their figures were danced on the larger stage. We watched several other dance friends on the larger stage throughout the day.

For the most part, results for grade level dances were posted within 10 to 15 minutes of the competition’s completion. The treble reels and champion dancer awards presentations were another matter. Many dancers competed at 8:15am and were still waiting for their awards to be called an hour, or more later. Some treble reel awards did not take place until 2 hours after the competition had completed. This did delay several families ability to head to the Little Rock Zoo, or home, longer than expected. Of course, from the Novice level and up, if you entered in a treble reel special, you also earned a chance to climb the podium for your awards presentation. Little Rock and River Valley are among the few feisanna who do award Novice and Adult dancers on a podium for their treble reel specials. It is certainly a draw for competitiors for this feis. After all, what Irish dancer doesn’t want to be at the top of the podium?

The feis offers several special competitions. Some, such as music and vocal competitions, are offered the night before. Others take place the day of the feis. In general, Judy McCafferty runs her feisanna in a quick and orderly manner. This was not a general feis day. Unfortunately, the figures, blind man treble reel specials, and stage schedules created unusual problems for the feis flow. Lunch break was cancelled, rescheduled, and scheduled yet again. Then, figure competitions and special competitions were moved from one stage to another. More than one competitor found themselves struggling to change their dancing shoes for competitions that ran out of order, on different stages than scheduled. Other figure competitions were started on one stage. Then, stopped, only to be restarted on a completely different stage. Even more confusing for competitors, the stage volunteers would promise to hold the competition, only to begin the competition without several competitors on stage. Many families found the confusion unexpected and challenging. Thankfully, Judy McCafferty handled all of the challenges with her usual grace, patience, and authority. The feis even ran ahead of schedule, ending just after 4pm, when it was scheduled to last until 6pm.

This was our second time attending the Little Rock Feis. The first with the flipped schedule. One of the reasons we love this set of Feises run by the McCafferty School is because all the stages are in one room, with the main stages together (A,B,C) on one huge raised platform with plenty of seating. The ample seating even allowed for the saving of seats with dress bags, coats, etc that dancers and families always do. My children were all on the A,B and C stages.

Our only issue with the Feis this year was the flow that resulted from flipped schedule and lunch timing. The Champions were going to be done early and the decision was made to continue on into the figures. Not all of our dancers were there and we began to frantically calling to get dancers to the venue in time to make figures. Then there was a mix-up with the timing of lunches between the stages and not all the figures were done. Some of the older dancers figures had to be redone and and moved to D stage. But once lunches were over and the dancing started up again with the Blind Man Treble Reel competition the Feis flowed quickly and efficiently. As the original poster said, we were done by a little after 4.

If you are familiar with the traditional Treble Reel, this year the Little Rock offered something different: A Blind Man Treble Reel. The judge’s back was to the dancers and they were judged simply on the sound of their reel. The dancers did not clap as they usually do and to answer the question we all were asking before we saw the competition, there was an assistant to tell the judge what number dancer was dancing at a particular time to keep everybody straight. This competition was the one dance my daughter wanted to do above all others. She really liked the idea that she was going to be judged on her feet rather than anything else.

The awards at this Feis are nice. 1st-3rd are gold, silver and copper with an enameled top of the Feis logo. Not a sticker. All other places awarded receive a nice heavy cast medal with the Feis logo in it. 1st place in Prizewinner received a small trophy. Unique Engraving was the Feis engraver. They were in the same room so you could pick up your medals at any time and start the engraving process while they were slow and avoid the long lines at the end of the day.

We were extremely pleased at how quickly the results were put up. The majority were up within about 20 minutes of the competition. Security was highly visible at the venue. Bathrooms were easily accessible and visible. We didn’t eat at the concessions, but it was open and had tables.

At one point in the morning when I was concerned about what time the figures were actually going to start Judy McCafferty took the time to answer my question when things were obviously very busy for her. She doesn’t know me and that moment is one reason we like to go to McCafferty run Feises. Even when situations arise they are handled to the best of her ability with patience and kindness.

My children are Novice dancers and that might color my view of this Feis.

Mike- I just read the little rock Feis review and it was spot on for the OC/PC level as well. The awards were so slow to be announced where it took 1hr 50 minutes for the competition to be announced which was painful! The awards for that level were much to be desired as well. First place got a little faux crystal Hershey candy kiss shaped dish and the other got small trophies. That is in comparison to the large Wilton Armatel platters my daughter has won in the NC/GA area Feis’.

I have attended this feis for many years and I have loved going each year. The reason why there was such a wait for PC/OC awards this year was because they wanted to make sure that all dancers were able to be on that side of the room. Figures were going on so they paused award announcements until the end of figures to ensure that a dancer would not miss the chance to be on the podium.