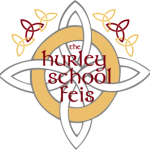 The 1st Annual Hurley School Feis was held at The Showplace Arena in Upper Marlboro, MD on may 25th, 2014.

A horse arena. Yes, I said horse arena. When we pulled into the parking lot we were immediately greeted by a parking attendant who promptly showed us where to park. The arena was large with several layers of stadium seating. Very spacious with plenty of room to spread out. There were several rows between each family. On the main floor were 8 stages, 3 champ and 5 grades (switching occurred later in the day). Each stage had its own musician and there were only a few stages stopped for small amounts of time. Surprisingly, the music was easy to hear when the stages were so close to each other. Competitions ran roughly to schedule, with some running early. Hands down the best part was the abundance of bathrooms. During multiple trips during the day, there was never a line. I have never seen this before, but it was a welcome surprise. Very helpful parent volunteers. Overall a very nice venue – which included a nice hamstring workout lugging feis gear up several flights of stairs in the stadium seating.  Did I mention no lines for the bathrooms?

Typical feis food, but plenty of it. Multiple places to buy the arena’s food plus a Dippin Dots cart and Italian Ice cart. There was also an adult concession area. Trust me, if I wasn’t driving, I would have been in there taste testing.

Typical vendors with an added embroidery vendor and the always cute Curly Girlz vendor. Who can resist a tiny image of your solo dress?

Rotating stages for grades dancers, so they never had the same judge which is good.

Grade results were posted on a level higher than the actual awards. Again – getting a good hamstring/ quad workout. When we arrived to pick up some hardware, we were told that they miscalculated the number of trophies needed, so they were out of the 1st place trophies. They did give my dancer an extra medal and smaller trophy to make up for the miscalculation. Champ awards were in a lovely area overlooking the arena. There were medal rounds for PC and OC. The trophies were large, sashes were nice and the podium placed 5 dancers. Beautiful place to get that special photograph with your happy dancer.

(would have been 10 except for the miscalculations)

Appeared to run very well for a first feis. Some stages were stopped for small amounts of time, but nothing too dramatic. From the schedule it looked like there would be many conflicts, but stage managers handled it well and kept the feis moving.

Would definitely return and we really enjoyed this feis

I believe this was one of the best feisanna I have ever been to. Agree with everything the poster stated above except for the food. The vendor did not expect such a large lunch rush and kept running out of hotdogs and burgers, so you had to keep waiting for more to be delivered. I would not hold that against Hurley though since the foot was done by the venue

We loved this feis! The venue was amazing (see review above). We loved the seating and the uncrowded restrooms. There were some music issues on my dancer’s stage (she had problems hearing the music, which affected her timing) but, overall, the Hurley School deserves major kudos for getting so many things right the first time.