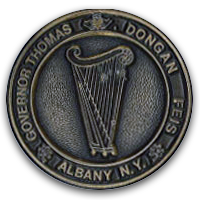 The 26th Annual Governor Thomas Dongan Feis was held on Saturday July 19, 2014 at the Empire State Plaza in Albany, NY.

After several years of attending this feis, I still have no idea why I can’t find the actual venue. Everyone says to drive to the “big egg”. I can see the big egg, but it always takes me 15 minutes to figure out how to park near the big egg. This year was a little better, with only 10 minutes of circling the venue and its three surrounding blocks before I paid my $5 to park. Bring cash with you upstairs, because each adult is charged an additional gate fee. Grade stages are in the main room, with champ stages in two separate rooms.

The rooms are closely guarded with volunteers who will not let in ANY outside food. If you want something to drink, you must buy it there and eat it outside. One volunteer actually tried to stop my child from walking in with her water bottle. The food is OK, long lines around lunch time.

The typical ones, shoes, socks and tee shirts. All of the essential feis items were represented.

I am always amazed when this feis starts. There are four grades stages, all running concurrently. All stages start at once because they share the same musician. The stages are on a convention floor, only the dancers are allowed in the stage area. Stage volunteers do a great job lining dancers up to be ready. There are plenty of seats around the stages (higher up) for all of the parents to view. Stages 5 and 6 are in separate rooms, one with a raised stage, the other flat. Both rooms had adequate seating for on lookers.

One musician for 4 grade stages. The reels start and they don’t stop until all of the stages are complete. It always amazes me that they seem to keep to their published schedule. The Champ stages basically ran to time when we were there as well. Great job!

Uh, not much to say here. Champ awards included sashes and tiny ceramic vases with near dead tiny flowers. Medal rounds included clear plastic “medals”. The grades had the same plastic “medals” and first place trophies as well. With all of the money collected at the gate, I would think better awards may be a possibility, but what do I know.

Good, kept to schedule. Awards came out relatively quickly. Parents were updated on Twitter with times of awards and pictures. Over all good.

We were quite pleased with the champ awards. It was nice to receive a Lenox vase instead of “just another trophy.” In grades, the acrylic medals stand out – different from the rest of the ones hanging on the wall. Yes, they are plastic but they are still my daughter’s favorite medals from all her years in grades because they are different than the rest!